and the First version of Iris

You can trace the beginning of Iris to Mar 8, 2015 when I made the first version with installer. I am sure there are versions before this, but I was promoting it with giving USB stick to some people and basically breaking their computers, because there was nothing working. This is how Iris 0.0.0 looked like

It’s so ugly, but it was so light and functional and minimalistic. This was the time that I was searching for the first users. I remember how hard we worked and I was publishing new version every day. In fact we worked so hard that this is how Iris 0.1.4 looked on March 23rd, 2015

Yep, for 16 days we built 16 versions. In fact the other guys was like
– Dude we don’t need to build version every day
and I was like
– We need to be more faster than this. We are too slow. We need to work harder.
I guess I was really pain in the ass to work with.

The be honest the first month there was only one user and this was me. The next month I started to do marketing. Marketing for me in this early days was going to all kinds of articles about eye strain and writing comments. If I found somewhere the e-mail of the people in the comments I also wrote them an e-mail.

As you can guess nobody answered me, but I was persistent and after a month Iris had 10 users. They were actually some of my Facebook friends, because I was posting every day in Facebook and some decided to try it.

I actually have no idea why I did this promotion when Iris was free back then. There wasn’t even donate button. I guess I just wanted to help some people with eye strain.

After we failed to win our student competition the team broke apart. I really wanted to continue working on Iris, but after going to all the investors they all told us that the project is stupid and nobody is going to use it and there’s nothing for them to pay in it.

As every crazy person with an idea I didn’t wanted to listen to them and proposed to the other people in the team to leave our jobs and with our savings to make Iris. Well you probably know their answer and in there defense I will say that Iris was really strange project back then with no future at all.

A couple of months passed and nobody was using Iris, but the website was still working. Then something happened. 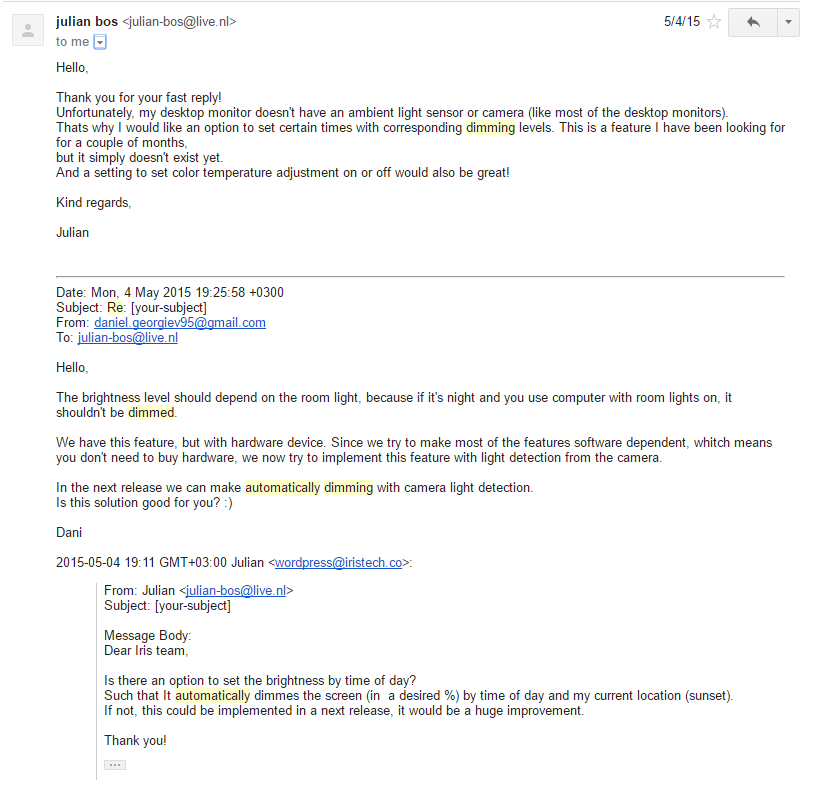 And 15 minutes later I made him a promise that I will add Automatic brightness for him to Iris. I am not sure when, but some of this days we said that the project is dead.

On May 29th, 2015 Julian wrote to me again to ask me if the feature is ready. I told him that Iris is dead.

But something was bugging me from the inside a couple of hours latter. I was keep telling myself
– You made him a promise. Is your word not worth anything?

I became angry at myself that I failed again and I just opened my laptop and started to make the new feature. After some time I send him this e-mail

This night I make promise to myself and decided to continue Iris alone. I made a promise that I will make Iris work or I am going to die trying. This time there will be no shortcuts and other options.

Back then Iris was free and I just made it to solve my eye problem, but after this point I decided to make a business out of it.

I quit my job, dropout of school and put my entire future and life energy into Iris. I don’t need to tell you that everyone thought I am crazy back then.

On August 9th, 2015 I wrote to the website that Iris is in active development again

I also wrote to every user to personally contact me for every minor bug and for everything. Later I learned that the same Julian promoted Iris in some Dutch website and brought so many new people to use Iris 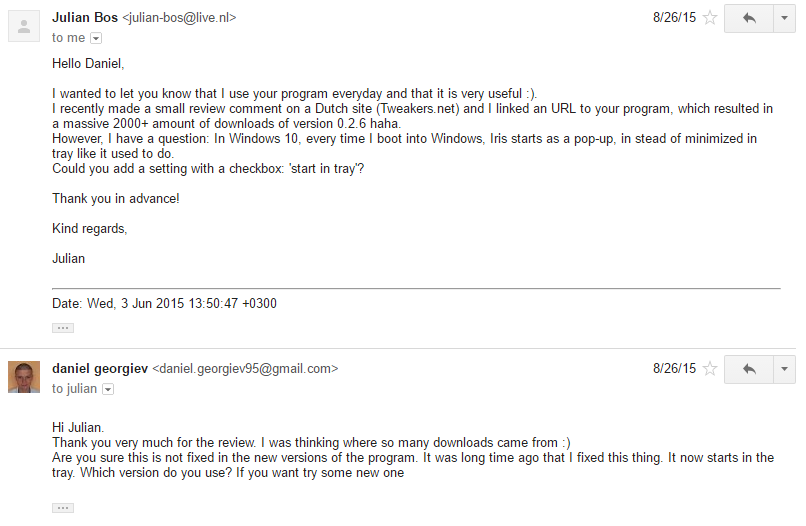 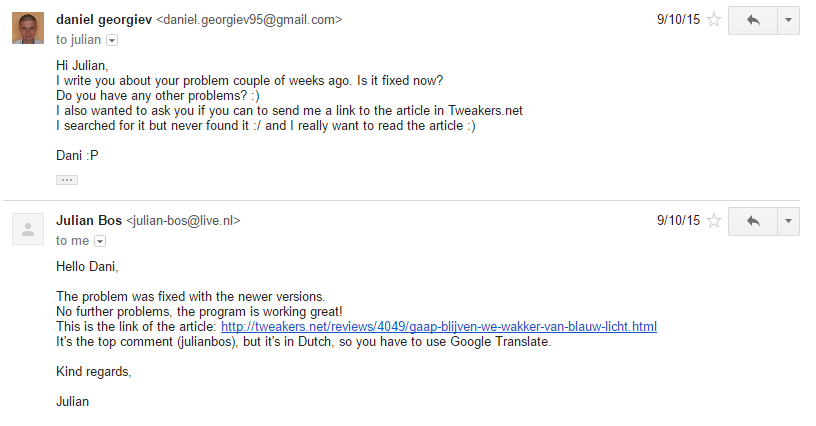 Compared to now, it’s really small amount of views, but back then I was super grateful and so happy

This months was just hard hard work, no sleep and more hard work. I was trying everything to promote Iris somehow, but unsuccessfully.

I did some presentations and make one article which became a bit popular in my country.

And in my first year of Iris this was also my only sale. I made 10$ for a year of non-stop work. I still remember how happy I was and I was jumping for several minutes in my room.

This was a period of time when I was really hungry. The only money I made was from selling Google Cardboard and some other Chinese things I bought online and I used the money to buy a little food.

When I left my job I had $6000 in by bank account and I managed to survive a year with this money. Don’t ask me how, it was hard. In fact this was the hardest thing in my life. I paid only rent and food. All my expenses were cut to minimum, I didn’t go outside, I lost all my social life and I was eating only the most cheapest food.

Looking back it doesn’t look so bad, but this was probably the lowest point in my life and I learned to value every penny.

On Christmas time I was sitting alone writing answers to questions in Quora trying to promote Iris somehow and on December 26th, 2015 I wrote an answer to Is C++ for Game Development only?

This answer became really popular and for couple of weeks it made over 100 000 views. Some people bought Iris again.

After this point I knew that maybe I can make it, I just needed to work harder. I guess this is a good time to tell about the business model or the licensing. I don’t remember exact dates, but Iris was free and donation based for almost a year.

I thought that people will love the program and donate some cash and I can make a small living out of it. You know I never wanted to me a millionaire or something I just wanted to work on Iris full-time.

What happened in reality I get exactly 0$ donations for it. At this point I didn’t had any money left from my saving and I knew that I need to change something.

In September, 2015 I make Iris to be free for one month and then to be subscription based for every month to be 10$. I thought, “Ok use it and if you like it you can support the project my giving 10$ every month”. I knew that this is not going to make Iris popular, but my point was that I needed only 100 people to pay and with 1000$ a month I will be good.

Well I didn’t managed to wait for the end of the month, but nobody paid again, so I started to think of new licensing model again. Then I came with the brilliant idea Iris to be free for 4 hours per day and if you want more you can buy 1 month of usage or 744 hours for 10$. I thought that this will be super awesome, because unlike most other companies it depends on you how much you will pay.

If you don’t use your computer much you can use this 1 month of usage for a year or more. Well this is the model that clicked and the first sales from Iris was from it. Later when more non-technical people started to using Iris they started cursing me greedy I’m, because they just didn’t understand the payment model.

This was until I made Iris mini at August, 2016 to be 2$ lifelong and so many people loved the program.

As more and more people was telling me that they want to use Iris, but it’s to expensive for them at first I was like “This is ok, I just want to make 100 users, they have Iris mini lifelong and free which is nice alternative”, but one day I just decided,

“My goal is to help the maximum amount of people right? Then I will make Iris free, but I also need somehow to make a living so I will make some pro features like in Iris mini.”

At this point somewhere in the end of 2016 I made Iris also free and Iris Pro which is 10$ for lifelong license. I was happy, because people started to also be happy. The ones who didn’t wanted to pay anything was just using the free version and the ones who wanted to support the project bought license.

I blocked the Business model in one section, but let’s get back to December, 2015.

There is so much more to say, but I’m going to leave it here right now.

This was the beginning of Iris.
TODO LinkedIn, Articles, TV, Magazines